Woodworking Women Round Table Discussion on March 31st, 2016 at the Loring-Greenough House at 12 South Street in Jamaica Plain, MA.

In September 2015 I joined the faculty at the Lexington Arts & Crafts Society in Lexington, MA teaching open shop furniture making classes and other specialized classes such as flat edge tool sharpening.

North Bennet Street School Student & Alumni Exhibit from May 19th-29th, 2015 in which my Woven Nest Jewelry Box was featured.

In September 2014 I joined the Eliot School Faculty http://eliotschool.org/faculty/faculty-profiles#AnnetteLippert teaching furniture making in open shop classes and woodworking both through the school partnership program and in-house at the Eliot School.

My Cafe Table was selected to hold all the diplomas during the 2014 North Bennet Street School graduation ceremony on June 6th, 2014. 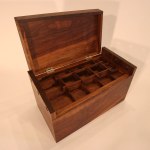 CraftBoston Holiday show in Boston, MA from December 5th through December 7th 2013 in which my Cafe Table and Chippendale Chair were exhibited.

18th Annual Fine Furnishings Show in Pawtucket, RI from November 1st through November 3rd, 2013 in which the Cafe Table was exhibited.

WBUR radio segment about Four Centuries of Massachusetts Furniture, which aired on October 11th, 2013 and in which I was featured. http://artery.wbur.org/2013/10/11/massachusetts-furniture-makers-exhibit

through October 14th, 2013, in which the Chippendale Chair was exhibited and awarded a Third Place ribbon.

Benchmarks of Excellence: work by students and alumni of North Bennet Street School show in Boston, MA from July 5th through  September 17th, 2013 at the Federal Reserve Bank, 600 Atlantic Avenue in which the Chippendale Chair was exhibited.

CraftBoston in Boston, MA from April 19th through April 21st, 2013 in which the Windsor Rocker was exhibited:

2013 Winner of the CustomMade furniture scholarship.

17th Annual Fine Furnishings Show in Pawtucket, RI from November 2nd through November 4th, 2012 in which the Shaker Night Stand was exhibited:
http://www.finefurnishingsshow.com/#

June through August 2012 I completed a summer internship in Sittensen, Germany at Möbelwerkstätten Sittensen GmbH